A Cup of Tea

“A cup of tea” is a performance inspired by a Zen Koan where a disciple comes to a master  asking for him to share his teachings and the master starts pouring tea in the disciple’s cup, but doesn’t stop when the cup is full and the tea gets spilled everywhere. The disciple does not understand the actions of the master and when he enquires about them, the master replies:

I cannot put my knowledge into something that is already full. First you need to free your mind of your preconceptions.

While quite a few Zen Koans are mysterious in their nature, and for some of them silence is the only answer, their beauty lies in the obvious and sharp truth that slaps you in the face when you least expect it as a reader.

The beauty of the Zen Koans lies also in the fact that while spiritual in nature, the writing rely and talk about common sense.

This performance uses simple and clear actions as well as repetition in order to translate the common sense attribute of the Koans.

The performance happens outside. There is no delimitation in between the performer and people passing by on the street. Cristiana sits on a chair. A table is in front of the, many cups and saucers on the cement. To the left there are 2 big containers filled with tea. She sucks tea through the long hose and spits it into the cups one by one. After each cup is filled, she throws it on the cement breaking it and the liquid spilling on the ground.

The action is repeated with every cup, until the last one that has a hole in its bottom. The tea is spat into the cup until there is no tea anymore. At the end the last cup is the only cup that remains on the table. The set up remains outside afterwards. Everything gets stolen the day after. Only the shattered cups and the stain of the tea on the cement remain. 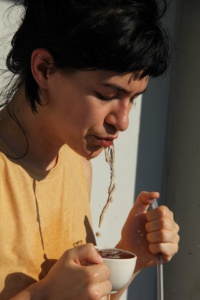 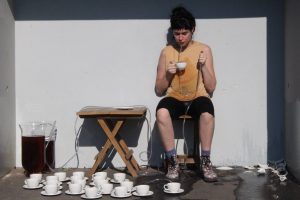 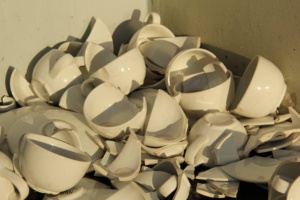 This performance was inspired by the zen koan: “A cup of tea” :

Nan-in, a Japanese master during the Meiji era (1868-1912), received a university professor who came to inquire about Zen.

Nan-in served tea. He poured his visitor’s cup full, and then kept on pouring.

The professor watched the overflow until he no longer could restrain himself. “It is overfull. No more will go in!””Like this cup,” Nan-in said, “you are full of your own opinions and speculations. How can I show you Zen unless you first empty your cup?”