Automaton is a performative installation and social experiment that exposes the fact that we often choose to do something hurtful to a passive person even if this person poses no immediate danger. The visitors are not just passive observers, but they are also being observed while taking action.

The performer sits on a chair in the middle of a triangular iron fence. She wears a computer-operated head and mouthpiece. The corners of her mouth are held by hooks that go in her mouth on each side. The hands are connected to revolving rod.

The audience enters the room and is confronted with an initially passive performative installation until a phone rings. When entering the booth and picking up the phone, a set of options of what to do is heard. Upon pressing the white button the audience is told the performer is forced into a smile and choosing the black button the performer laughs. When the white button is pressed, a motor is activated, and the cheeks of the performer are pulled back to induce a smile. with the black button, another motor additionally makes the hands move up and down, simulating a laughter fit. A recording of canned laughter is played in the cell. Spectators remaining outside of the phone cell are able to tell that the actions are activated by the person in the booth. They can decide to go in or not. 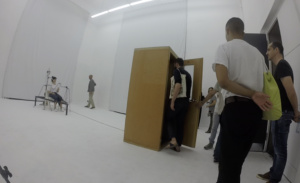 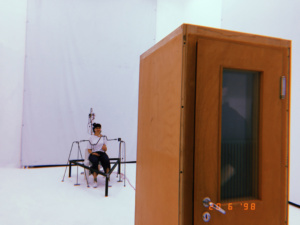 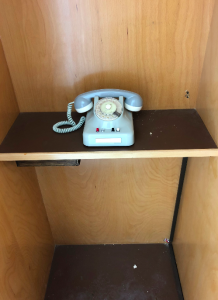 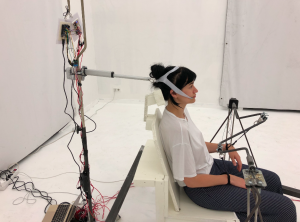 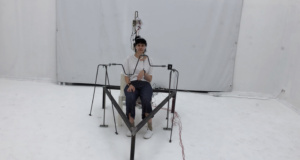 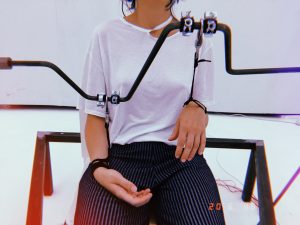 Come in,
enter the cell.
Listen.
Decide.
Watch.
Filter.
Get out of the cell.
Watch the people.
Filter.
Watch again.
Stay,
Or leave.

Is laughter a social construct, if smiling is also found with other animals? Which smile is fake, forced or misinterpreted in society? Can we see the difference between a constructed and a genuine smile? Does it claim superiority or empathy? What does a smile say? Does it talk? The real talk?

Out of approximately 70 people, 2 people decided not to go in.

One person went in but did not press any button. All the rest of the people went in and pressed both buttons. Most of the people tried to press the red button. More than half of the people pressed the white and back buttons repeatedly.